During the print process online monitors are used to capture the process fingerprint including temperatures and thermal emissions. The raw data is used to extract process relevant information such as melt pool dimensions. Data analytics is applied to the acquired data to identify correlations and/or reduced order models that could accelerate feedback for new products improving overall prediction accuracy. The INTEGRADDE cyber secured digital thread linking all process steps is demonstrated using CC-coupons as shown in the FIgure 1. 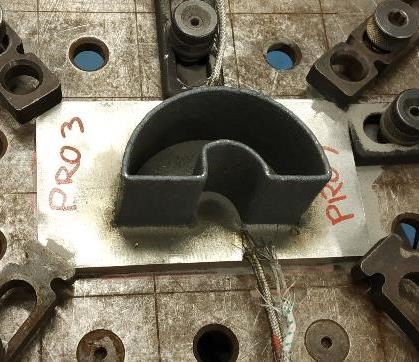 Preliminary simulations were performed analysing different powder feedstocks and the expected manufacturing outcome. The coupon is built using a powder where no cracking is observed. The deposition strategy is based on a single bead being starting at the central point of the larger C-surface. The scan direction alternates for every layer. The physical experiment incorporates four thermocouples fixed on the base plate as well as a co-axially installed infrared camera monitoring the melt pool emissions. Figure 2 shows how numerical predictions of base plate temperatures compare with thermocouple readings. The curves are almost identical confirming the physics-based model and more importantly confirming that the virtual and digital twins are conformal to one another[1]. 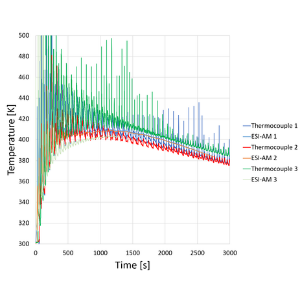 When analyzing the emission data captured during the manufacturing process, a missing bead is identified, as can be seen in the mean emissions image in Figure 4. The reason for the missing information is not captured in the digital twin. A three-dimensional reconstruction of the CT scans shows a dent in the surface where the thermal emissions are missing (Figure 5). It is thus assumed that the laser was temporarily switched off leading to the lack of thermal emission data for that bead and to no material deposition as can be seen in the specimen. During the deposition of the next layer material is deposited compensating of the lost bead but with less optimal standoff distance leading to the structure identified in Figure 3. 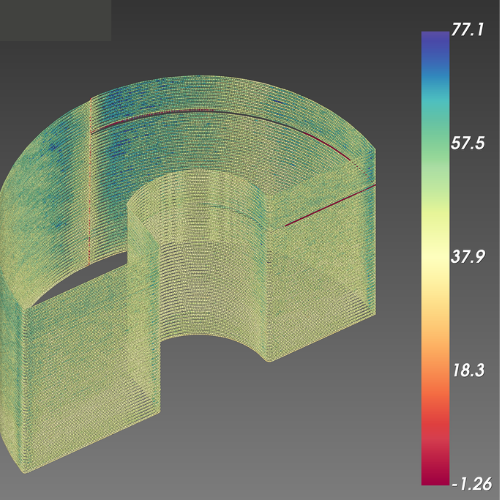 The physics-based assessment of the manufacturing process does not take such a problem into account. In order to assess the severity of the malfunction and its effect on the product quality, the distortion simulations are repeated by changing the sequence of deposited layers to match what happened during manufacturing. The model does not capture the suboptimal standoff distance and as such negligible differences in the distortion predictions are shown. The residual stresses are almost identical showing that the manufacturing malfunction is not critical for the product integrity and quality. If large differences were predicted corresponding characterization and mitigation post-processing steps could have been envisaged. 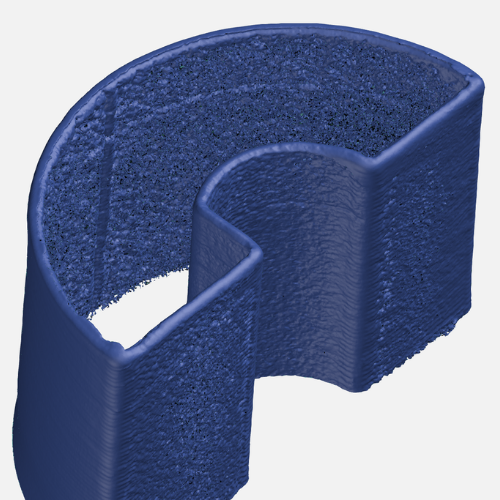 Within the scope of INTEGRADDE a cybersecured digital thread was developed incorporating physics-based assessment of designs and intended manufacturing route. The digital thread also incorporate data originating from online process monitoring systems. The combination of the virtual and digital twins enables the use of a hybrid twin assessing preparation work, manufacturing processes, mitigating risks and ensuring that the produced part fulfils functional and quality requirements. The optimisation capabilities offered by the system include aspects such as topology optimization, improvement of material data bases, assessment of feedstock suitability, reduction of manufacturing defects and compensating them.